Posted by tales from the fifteenth floor at 03:27 No comments:

[via Shelter]
Posted by tales from the fifteenth floor at 09:24 No comments:

Take a look at this brilliant film from the London Metropolitan Archives [via WowHaus] about the Barbican estate. Produced in 1969, the film documents the development of the estate following the bombing and almost total destruction of the area during the Second World War.  According to the City of London, by 1951 the Cripplegate ward had a population of 48, with only 5,324 in the whole of the City of London. The Barbican was developed as a way to address concerns about the City's dwindling resident population by attracting city workers away from the suburbs to the inner city,  through the provision of high density residential accommodation, as well as shops, schools, services and cultural amenities, all within walking distance of the office.


Posted by tales from the fifteenth floor at 12:01 No comments:


I'm happy to report that Howard Miller and I have been included in an exhibition of ideas for the Landscape Institute's High Line for London competition for our shortlisted entry Retracing London's drovers' roads: From Hackney to the City. You can see the exhibition at London's City Hall until the end of November. 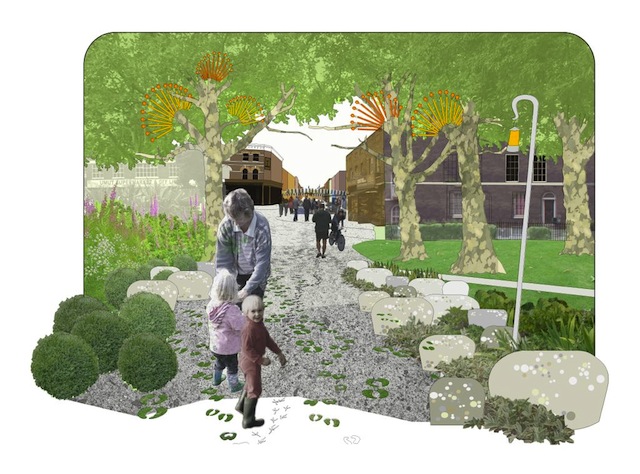 Drovers' Roads were a network of ancient routes that were used to move livestock on foot from pasture to market. From 1300 to 1900 sheep, cows, and turkeys where driven from Wales and Scotland to London. On route, drovers would stop on rich commons to fatten their animals up for market. These routes still exist in London; many are still popular desire lines for those on foot. We focus on the route from Hackney to Bishopsgate (the entry point into the City) and propose a pattern book of components to retrace and reinterpret the drovers roads by creating:

Landscapes of living heritage; that playfully recall the route's previous use and serve as a reminder that London's food supply is as reliant on its networks now as it was then. Certain elements are inspired by drover folk-lore: Rowan trees were considered lucky.

Spaces for slow activities; drovers traveled slowly along their routes to keep their cattle healthy; people need slow places too; to read, explore, graze and play. We propose permeable paving with hoof shaped holes to allow soak-away drainage. The plodding footsteps set the pedestrian tone for this green route.

Green systems put to work; we propose to fuse hard and soft landscape elements that are traditionally separated: trees double as way-finding devices; paving is both a hard walking surface and a growing medium. Plant species are selected for biodiversity, trample resistance and to align with the concept; many of the plants have seeds that are transferred by animals.

Posted by tales from the fifteenth floor at 10:37 No comments:

Housing, Utopia and the 2012 Olympics 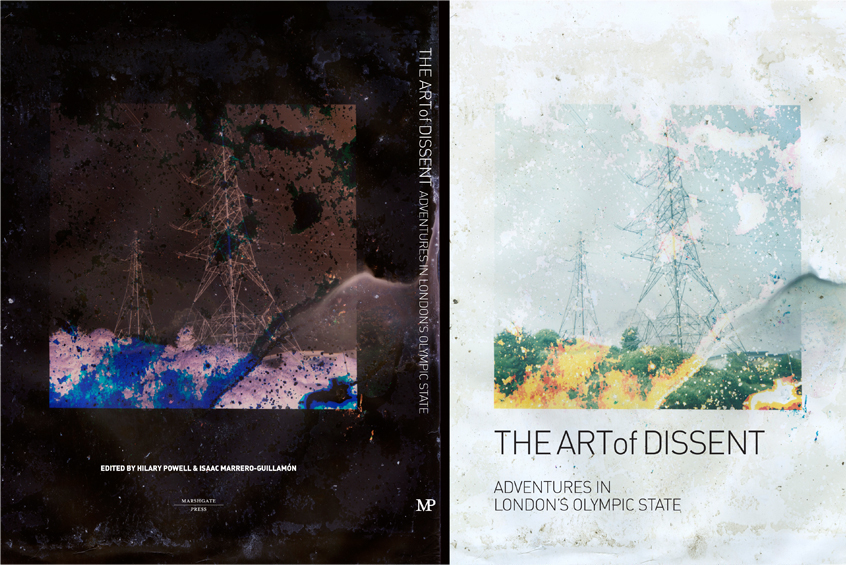 The fantastic artist Hilary Powell and academic Isaac Marrero-Guillamón have just produced an edited volume The Art of Dissent: Adventures in London's Olympic State. The book, which has been beautifully illustrated by Hilary Powell, includes critical responses to the Olympics from artists, writers, film makers, academics and photographers, with contributions from amongst others, Iain Sinclair, Lara Almarcequi and Chris Dorley-Brown.

The piece I wrote for the book with Duncan Hay  focuses on Holden Point, a 22 storey block of sheltered housing on the Stratford side of the Olympic site, and which is also the location of the Olympic Park Viewing Platform. As such, it has played a role in creating a particular image of the Olympic site for visitors and residents. It also embodies the starkness of the contrast between the huge investment in the Games and the lack of investment in the deteriorating estates that surround it. Housing schemes such as Holden Point were themselves built on the basis of the promise of a better life for their prospective inhabitants. Through a collage of the different representations of the past and future developments around the Olympic site, historical research and prose, we question whether the utopian promise of the Olympics, or indeed the utopian aspects of the post-war social housing schemes around the site, can hold good.

If you're interested in reading more you can buy the book here.

Posted by tales from the fifteenth floor at 06:13 No comments:

How can we build more homes in Britain?

A brilliant video by the Institute for Public Policy Research.
Posted by tales from the fifteenth floor at 09:57 No comments:

Earlier this month I was lucky enough to hear Jane M. Jacobs talk about her research into the Un-making of Red Road, a famous Glasgow high rise estate that is currently undergoing phased demolition and regeneration. As part of her presentation Jacobs showed this powerful film showing the demolition of the largest and most iconic of the Red Road tower blocks.

The story of the Red Road Flats is a familiar one:
Despite these issues demolition was not an inevitable outcome for Red Road. Rather as Jacobs, Cairns and Strebel argue, ‘the fact of Red Road as a housing failure’ was produced by the official discourse which emphasised the presence of asbestos in the building fabric and ‘short-circuited’ any attempt by residents or campaign groups to ‘complicate … the story of Red Road.’ At first glance this justification does seem like a sensible and irrefutable one. However the presence of asbestos in a high rise block does not always lead to demolition. For example, in my own estate, Golden Lane, the presence of asbestos in the building fabric does not guarantee its demolition. In the estate plan it is Golden Lane’s architectural heritage, listed status and importance as ‘an example of post-war residential architecture’ that is emphasised. Warts and all Golden Lane is treated very differently to Red Road; it is protected, repaired and restored.

For me, the divergent paths of these two estates, with similar historic routes, questions the often told story of inevitable modernist high rise decline and eventual destruction. Stories told about Red Road and other estates show that modernist housing does not follow one linear path, but multiple, complex and contested ones.
Posted by tales from the fifteenth floor at 12:36 No comments:

tales from the fifteenth floor